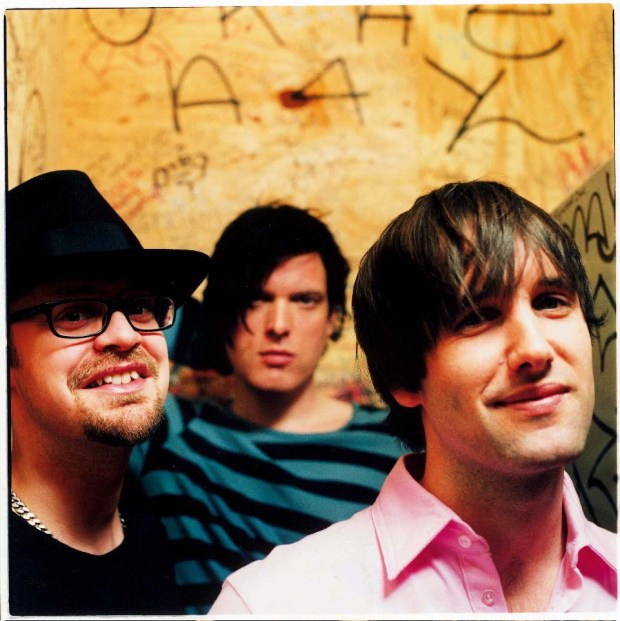 Ash is another band I owe a debt of gratitude to the Cornerstone Player for. A year before the US would see the release of Meltdown, the video for ‘Clones’ appeared on a Cornerstone Player I had nabbed off of the net. I remember sitting forward on my couch when the ‘Clones’ video fired up – the sonic guitar riff that starts the song off to the climactic outro of drums/guitars and vocals. I was instantly hooked. Even the video (a medium I have no time for anymore), was clean and energetic. Shot with hues of Yellow, it features the band rocking out in a small room together. Within 6 months I had all of Ash’s back catalog. I’m still trying to figure out how such a great band had eluded me for so long. Since Meltdown, Ash have dropped from a four-piece band to a three-piece with the departure of Charlotte Hatherlay to pursue a solo career. Ash are now in New York, putting the finishing touches on their new, as yet untitled cd, and getting ready to do some small venue dates in the UK through late February and March. I managed to get ahold of Mark Hamilton (Ash’s bassist), via myspace, and wrangled an interview. We chatted via the email in December.

1. – After Meltdown – Ash opted to relocate to New York. What provoked this move? Why New York?

Both Tim and myself had big changes in our personal lives. We’d also both lived in London for over 8 years and it was a good time for a new adventure. New York is a great 24-hour city with loads going on and lots to be inspired by both personally and creatively as a band. We’ve got our own studio now in midtown, Manhattan. It’s our own private refuge and creative command center, we’ve never had a place like it.

2. – It took almost a year for Meltdown to get a North American release – will the new CD be released as late in North America? Or can we expect a day-and-day commercial/UK release?

It’ll most definitely be released later. We’d love for it to come out in the States on the same day but for various reasons out of our control we don’t think that’ll be happening.

3. – (This may tie-in to the previous question) In North America, I find Ash remains relatively unknown (compared to how huge you are abroad). Will 2007 maybe change this?

We’ve got our fingers crossed! We have no exact details yet about a US release but as ever we’ll be ready to get out there and tour and promote the album when the situation arises. We’ve always given America a shot and put in a lot of touring in the past but we’ve never quite got that lucky break at radio or MTV that would take things to the next level. You just gotta be ready for when opportunity strikes and this new album is no different, we’re as keen as ever to become a US success story!

4. – Ash has been a ‘signed’ band since 1994. You are now a band with legs – boasting 12 years together. Are you ever surprised by this fact? Did you know you’d be a successful band as teenagers?

Well we always had this blind belief that we could make it, as to what ‘making it’ was we probably had no idea! I’m not sure we’ve ever really thought about what we’d do if the band came to an end. It’s inevitable that one day it will but we’re always just focused on the next album, the next task at hand and making it as good as we can. The greatest thing for us is that we’re still making albums and are able to tour the world 12 years after we left school to go full-time. None of us have ever had a ‘proper’ job and to be able to have a long career in music is extremely rare and hard to maintain in this day and age.

Get up, feed the cats, check / answer emails, answer 40-50 myspace fan questions, call the UK, maybe eat something, surf the net / watch Tivoed shows, do a bit of Christmas shopping in the city, head into the studio in the afternoon, listen to Tim’s singing from the night before, talk about stuff we’re doing, eat pizza for dinner, depending on what’s going on in the studio either stay there or head home…

6. – Are you basically living in your New York studio space? Or do you spend time there only when you are inspired?

We live here in our own apartments. Tim lives in the Lower East Side and I live in Williamsburg in Brooklyn, Rick stays at mine when he’s over to record / rehearse. We’re usually in the studio 5 days a week.

7. – What are you drawing from in New York for inspiration?

We’re just taking the chance to be as creative as possible having our own studio and effectively starting over in a new country. There’s no pressure on us here apart from the pressure we set ourselves and our record company pretty much leaves us to it which is nice. You’re always gonna get inspired by your environment, the people, the sounds, etc. especially when you relocate to a new city. It feels like a whole new chapter in both the bands career as well as our personal lives, it’s exciting.

8. – Are you following any music that’s impressing you right now?

Brand New’s new album is pretty amazing. Claudius Mittendorfer who engineered our album also recorded ‘The Devil And God Are Raging Inside Me’. I just think they’re a band who’ve got better and better and who push the boundaries of what they’re doing on each album. Tim is a big fan of the NY band Levy though i think they’ve just split up. Rick really love The Knife.

9. – How about the opposite? Who’s not really floating-your-boat musically right now?

Most generic Rap and R&B makes me wanna blow my brains out. All those MTV video’s that are all about bling, ho’s, grills, crotch grabbing, pimped up cars and mansions are so lame. However the same can be said for most musical genres and their associated stereotypes. Don’t get me wrong the good stuff always floats to the top but because it sells the most commercially there seems to be mountain loads of crap that’s force fed to us on radio and television.

10. – What’s the biggest moment of unbelief for you as a band? A moment in your career that has genuinely allowed you to revel.

As a band it’s truly amazing when you walk out on the main stage at a festival like Reading and there’s a sea of thousands of people and during the set they’re going crazy. It’s hard to describe what that feels like, It’s the most surreal thing. Coming back from the brink of bankruptcy after Nu-Clear Sounds was nice, a lot of people thought we were finished and it was good to have another No. 1 album and prove them wrong.

Personally visiting and staying at Skywalker Ranch was kind of a dream come true for me, I’ve been obsessed with Star Wars since I was a kid. The people that work there are so nice and having Clones used in the Republic Commando video game was something I wouldn’t have believed if you told me before hand.

11. – If you could pick a single individual to collaborate with, who would you pick? And why?

Peaches because she’s cool and one crazy bitch. She doesn’t give a fuck and I’m sure we could come up with something very interesting!

12. – Could you describe how an Ash song comes together? Maybe pick a new track and describe it’s inception through to mixing.

Blacklisted is the last song new song that we wrote and arranged in the studio. It started out as a verse and chorus that Tim had written on his acoustic. There was no particular words bar a few lines but the melody was really strong. We spend a few days trying out different directions to take it in as it very melodic but we didn’t want it to get too pop so we honed in on some quite dark drum and guitar sounds. Once we nailed an arrangement we recorded the backing track and then Tim write the lyrics just before he sings it. We’ve lived with the basic recording for a few weeks now so we’ll come back to it and may make some changes then record backing vocals and it’ll be ready for mixing…

13. – Are you guys taking in any TV? What’s going to hurt the most having to miss when you are touring?

I watch a ton of television since I moved here and got cable. My stories include House, Grey’s Anatomy, Criminal Minds, Medium, SVU, South Park and rather sadly Ghost Whisperer.  I also can’t go to bed without watching The Colbert Report and The Daily Show. Luckily you can get almost all these shows on DVD and the Comedy Central shows are on itunes so touring shouldn’t be a problem!

14. – Can you pick your favourite live moment as a band together? Where you felt like you could do no wrong onstage?

The London Astoria has always seemed like a spiritual home to us. We’ve played there close to 20 times and more times than anywhere else. Developers plan to knock it down and a build new mall or something which will be a tragedy as it’s an amazing venue to both play and watch shows. We’ve also had really special moments at the Reading Festival which we’ve played at least 6 times, it’s definitely our favorite festival and has a great history.

Expect to hear us storm back with our most complete and brilliant album yet, then take to the road on a planet-wide world tour which will leave no stone uncovered on our quest for greatness.

We expect Ash fans to turn up at our shows dressed as warriors, any form of warrior is acceptable be it; Knight, Viking, Samurai, Ninja, Pirate, Slayer, Vampire… use your imagination, it’ll make the audiences more interesting for us to look at.

17. – Ash recently performed two small gigs in New York. How did it feel to bust out some new and old material as a three-piece again?

It was a huge weight off our shoulders to know that we’ll be fine reverting back to a 3 piece. It was obviously nice to play a few new songs and also rework some of our usual set. We’ll probably do a few more warm-ups in New York in February before we take off on the pre-album tour of the UK.

18. – With Charlotte parting ways with Ash, how will this affect your sound (aside from the obvious lack of female vocals)? Would you consider touring with a fourth – or do you feel it’s all good with the three of you on the road?

We’re gonna stick with the 3 of us to start with it was how we started out and was never a problem then. It sounded good on the 2 shows we’ve already played and we don’t mind if things don’t sound identical live to as they are on record. Who knows how things may develop but we’re back to basics for the immediate future. It has made things fresh and exciting again on stage after 8 years as a 4-piece.

19. – Lastly, when do you anticipate touring again?

We’ll be starting the touring in the UK in late February. Dates will be announced pretty soon on:

We always look forward to the pre-album tours because these are usually the hardcore fans who’ve been waiting to hear new material for ages and are mega-excited. Of-course once the album is released in May/June we’ll be back touring again with all the usual festivals on the cards.